Learn All About Unlimited Data Plan Comparison for 2017 in USA

Now before we talk about the actual data plans, let’s talk about the two carriers. With Sprint and Verizon, they use CDMA network meaning that most of the phones you use are going to be locked to their network. You can’t just go on, for example, buy A1 + 3 and bring it on to Verizon or Sprint and expect to be able to use it to its full capacity. It doesn’t work like that.  You have to use T-Mobile or AT&T to do something like that. Those two networks allow you to do in bringing almost any phone you want over to their network, as long as it’s unlocked or if it’s locked to their specific networks and you can use it on theirs. Otherwise, with Verizon and Sprint, you’re down to their phones they have and then AT&T and T-Mobile you have more of choice. 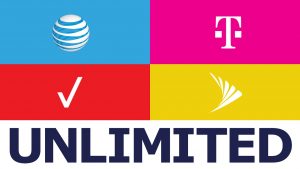 So now let’s talk about the plans themselves. All 4 of the major carriers have some cap even though they call it unlimited they still have some cap. With AT&T if you go over unlimited of 22GB on their plan, they have the potential to slow you down if you’re in a congested area. With T-Mobile, it’s 28GB, with Verizon it’s 22GB, and with Sprint you’re looking at not being able to load videos, and stream videos over 480p be that on Netflix, or YouTube whatever the video network is.

Next, let’s look at the price. With Verizon, it’s $80 plus taxes, so you’re probably in the $19,95 range after taxes. With AT&T it’s going to be $100, but then you also have to sign up for their DirecTV, and their lowest DirecTV package is $50. You’re looking at $150 and that, but that would give you some DirecTV’s service along with unlimited data. T-Mobile is going to be $70, and the cheapest of the bunch is currently Sprint, and they are at $50.

Also, keep in mind that somebody’s carries you will have to be on autopay/paperless statements, to save some money, otherwise they will charge you $5 more on that plan.

So, based on those numbers, the price for the plan the availability of the phones and the actual data that you end up getting. Let’s knock off some of these carriers right off the bat.

For AT&T, I think it’s way too expensive for the price of unlimited data for what they’re trying to charge you. $150 for unlimited data which is just 20GB and if you enter a congested area you possibly could pay more and then also you get to pay additional at least $50 to get their TV service. So that ends up being $150 plus. I would say don’t bother with that just go with one of their tiered data plans or do a different carrier.

Next, up Sprint, most people I know, like me family, friends, or maybe some of you guys as well, hate Sprint they think they suck. If you look at most of the people that talk about them online, it’s just bad stuff. I know some of you guys have good experiences or good luck with the Sprint network, but overall, I wouldn’t recommend them to anybody have heard too many nightmare stories and their customer service and also their actual network it sells. I know they say they’re in the within 1% of Verizon I just don’t see it guys at all.

Maybe in some places but otherwise they can’t hold a candle to arriving or even AT&T and most likely T-Mobile as well.

That leaves you with Verizon and T-Mobile, and as we all know, I think most people at least from word-of-mouth, friends, and family that I have, people that I just know that have Verizon. Most people are very happy with Verizon they have great called they have great data, and then with T-Mobile, I see it up and down. I have some friends that have, and every time they call me I cannot hear a word that they are saying. It’s very muffled call. I know some of you have great experiences. Data speeds I see up and down.

Obviously, their prices decent at $70 that includes taxes as well so you’re just paying $70 and then if you get a phone obviously with all these plans you are going to add on that phone that you’re paying for so obviously these plans go up in price. So, again Verizon or T-Mobile who would I go with? It’s tough because, for someone like me, I love getting a different phone. Multiple times a year I love being able to have the opportunity to buy a phone like A1 plus 3 or any other unlocked phones and bring it on to that network.  So, it’s really up to you guys regarding who is going to give you better network access.

Verizon is going to offer you solid calling solid data. They both have some extras that they have in their data plans. For instance, T-Mobile gives you free unlimited 2G data in home over 100 countries whereas with Verizon it cost $10 per day up to 500MB.

T-Mobile also gives you one hour of free data on plane rides when you fly and also free unlimited texting on planes. Verizon does not offer anything like that. So really look at those two carriers see which one offers you more of what you want those two carries I was breaking down with as having the best unlimited data plans.